The 5 Largest Half Marathons in the World

With the half marathon gaining popularity year after year, there are thousands of half marathons held worldwide. For those who are new to the sport, there are many choices on where to take on your first race. Half marathon enthusiasts have hundreds of convenient choices to tackle another. Half marathons are not as grueling as marathons, which makes this event much more popular. Even though half marathons are popular all across the planet, Europe and USA seems to have an edge when it comes to the sheer number of participants. To get a better idea about the biggest events out there, here’s our list of the 5 largest half marathons in the world.

This is an annual running competition held in Gothenburg, Sweden. With 62,000 participants last year, this is the largest half marathon on the planet. First started in 1980, when half marathons were barely known, the race has rich history with some of the biggest names in the game competing for the ultimate prize. The race is open for anyone above 17 years of age and has a great atmosphere along with music and other smaller events. Kenyan runner Victor Kipchirchir, who completed the race in 1 hour and 25 seconds back in 2012, holds the current record for the fastest time. Ugandan long distance runner Jackson Kiprop took last year’s trophy completing the event in 1 hour 3 minute and 13 seconds. Isabella Ochichi was the last year’s women’s champion completing the event in 1 hour 11 minutes and 29 seconds. 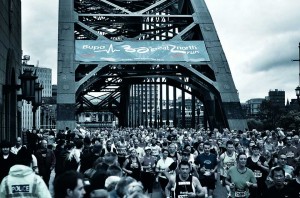 The Great North Run starts near the Tyne Bridge in Newcastle.

This annual event held in North Eastern England is the second largest half marathon in the World. Bupa has been the title partner of the race since the 90s, hence it is popularly known as the Bupa Great North Run. The event first started in 1981 with 12,000 participants. Now it’s one of the biggest racing events in the World, with more than 56,000 runners participating last year. Kenyan racer Martin Mathathi holds the current record for the fastest completion time of 58 minutes and 56 seconds set in 2011. While the fastest time recorded by a woman is 1 hour 5 minutes and 40 seconds set by British racer Paula Radcliffe in 2003. Participated by some of the best runners in the world including some Olympic gold medallists this is probably one of the toughest running events in the world. The event also hosts a wheelchair race which one of the biggest races of its category.

The next race on our list of the 5 largest half marathons in the World takes us to United States of America. The OneAmerica 500 hosts the largest half marathon in the country and the third largest in the world. Held annually in Indianapolis, Indiana, the race attracts runners from all across America and abroad. Popularly known as Mini-marathons, the half marathon event started way back in 1977. Kenyan racer Gabriel Muchiri currently holds the record for the fastest time by completing the race in 1 hour 1 minute and 54 seconds at the 2002 event. Albina Ivanova holds the record for the fastest time set by a woman. She completed the race in 1 hour 11 minutes and 24 seconds winning the 2003 women’s title.

Held annually in Arizona, the marathon is part of the Rock ‘n’ Roll Marathon series. Like all the Rock ‘n’ Roll marathon the event is owned and organized by Competitor Group, Inc. The events usually have a musical theme with many live band performances meant to entertain participants and spectators alike. Haile Gebrselassie, won by completing the race in 58 minutes and 55 seconds, setting an all time best record at the 2006 half-marathon event.

The next on our list takes us to Nashville, Tennessee. Nashville serves as the location for the one of the country’s biggest half marathon events called the Country Music Marathon. The event is part of the Rock ‘n’ Roll series and is organized by Competitor Group, Inc. As the name suggest, the event is brought to life by live music performances that aims to cheer the runners and entertain the spectators. The event started back in 2000 with little over 2500 participants, and now it has grown into an international event that attracts over 30,000 participants from all over the world.