The Chicago Half Marathon is one race of a 3 part half marathon series that also includes the Chicago Spring Half Marathon and the Michelob Ultra 13.1 Marathon Chicago. The organizers of the Half Marathon Series are offering special opportunities for runners who choose to participate in more than one of these races. By participating in 2 or 3 of the races, runners will receive priority packet pickup and gear check at the Chicago Half, as well as a commemorative medal for completing more than one race in the series.

The Chicago Half Marathon starts and finishes in Chicago’s iconic Jackson Park, just south of the Museum of Science and Industry. Jackson Park was originally created to host the 1893 World’s Fair and includes over 600 acres of green space, providing an ideal setting for a race. The half marathon is an out-and-back course with the first few miles around the perimeter of Jackson Park. After going around the southern end of the park, the course heads northwards along Lake Shore Drive towards Burnham Park. 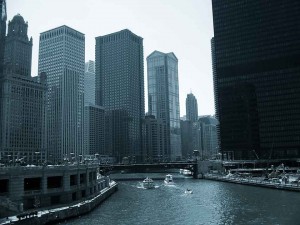 Chicago is a fun and vibrant city with plenty of scenery both during and after the half marathon.

The Chicago Half Marathon is a favorite among many runners because of the wonderful city views from Lake Shore Drive and the pleasant race course along Lake Michigan. Lake Shore Drive is a popular filming spot for Hollywood and has been used for scenes in Cheaper by the Dozen, Ferris Bueller’s Day Off, Risky Business, and My Best Friend’s Wedding, among others. It is also possible to see the Chicago landmark John Hancock Building from Lake Shore Drive.

The Chicago Half Marathon is known to be a well-organized race and usually has excellent reviews from participants. There are 10 aid stations along the route serving both water and Gatorade. This year’s half marathon will also see on-course entertainment including spirit squads, local bands, and school bands. The organizers also provide well-reviewed long sleeve technical T-shirts and custom commemorative medals for finishers.

Prior to the race there is a Hyundai Hope on Wheels Health and Fitness Exposition. This event will be held on Friday, September 5 from 12:00 pm to 7:00 pm and on Saturday, September 6 from 9:00 am to 5:00 pm. Race numbers and T-shirts can be picked up from the exposition. Exhibitors at the exposition will include retailers with bargains on running and fitness gear, nutritionists, trainers, and charity partners of the Chicago Half Marathon.

Awards are provided to the top three female and male finishers in both the Open and Master’s divisions. Additionally, awards will be given to the top three women and men in each age division.

Weather conditions in Chicago tend to be mild to moderately warm in September. September temperatures average between 57°F and 76°F. Chicago rainfall in September averages 3.2 inches for the month.

Chicago is an excellent destination for runners from out of town. In addition to having amazing views of Lake Michigan and the Chicago skyline from the race course, there are many attractions to see before and after the race. Plan to spend the weekend in the city exploring the heritage of this dynamic and culturally rich city. Some recommended attractions include the Museum of Science and Industry, the Field Museum, the Art Institute of Chicago, Millennium Park, Wrigley Field, and the John Hancock Observatory.